There are three ways of spelling the place-name − “Happisburgh” as on road signs and Ordnance Survey maps, and “Haisborough” and “Haisbro” (the way the word is pronounced) on Admiralty charts. For centuries the lines of shoals stretching sixty miles out to sea made the coast notorious for shipwrecks and strandings until, from the early nineteenth century onwards, a string of historic lightships with names redolent of past attempts to tame the ocean was placed on station by Trinity House: Inner and Outer Dowsing, East Dudgeon, Cromer Knoll, Haisbro, Newarp, Cross Sands, Smiths Knoll, Cockle and Corton.

The 1890 edition of White’s Norfolk Directory describes the church as “a lofty pile of flint and stone” with a “fine embattled tower containing five bells and rising to the height of 112 feet. . . The building, a few years since, was restored at a cost of over £2,000, stands on an elevated point of land within a short distance of the sea-cliff, which, rising perpendicularly, and having an under stratum of sand and gravel, is so continually wasted away by the tides and storms, that it is more than probable that at some future time the church will be engulfed in the ocean”.

The linocut shows the church on the hull of the lightship, surrounded by mountainous waves. Beacon flames backed by a compass rose stream out from the top of the tower, fanned by a westerly gale. Three lifeboatmen lean out holding lifebelts. The leading lifeboatman has a chalice and paten in his hands. A rope ladder hangs from the side of the ship. The On the horizon the moon, sun and stars rise over the sea. Two churches are seen on the horizon.

The text of the linocut is the refrain of the four verses of the sailor’s hymn Eternal Father Strong to Save. The linocut was engraved in about 1966 in aid of the church restoration fund. 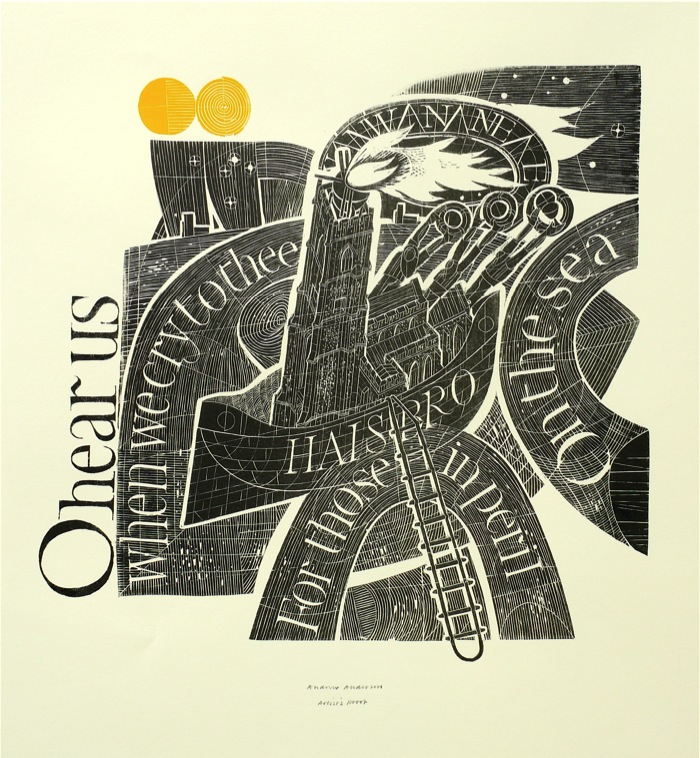