Pevsner described West Walton church as ‘one of the most sumptuous Early English parish churches – not only of Norfolk’. The linocut shows the church with its detached bell-tower and churchyard wall, surrounded like an ark by the floodwaters of the surrounding marshes, dykes and rivers. Men in boats bring building stone from the quarries of Lincolnshire, the flag of St George flies in the wind from the top of the tower, and Noah leans over the battlements, sending out the dove in search of land. The sun with streaming flames sails overhead, accompanied by the planets.

The verse on the rainbow is taken from the famous flood board in the south aisle commemorating three of the floods which engulfed the church and village periodically in the seventeenth century: “To the immortal Praise of God Almighty, that saveth his people in all Adversities, be it kept in perpetuall Memory, that on the ye first of November 1613 the Sea broke in and overflowed all Marshland, to the grate danger of Mens lives, and losse of goods; One the three and twentieth day of March: 1614 this Country was overflowed with the fresh, And on the twelveth and thirteneth of September 1617 all Marshland. was againe overflowed by the Violence of the Sea.”

The linocut was engraved in 1965 in aid of the church restoration fund, with a hundred copies printed for sale at a guinea each. In spite of floods and settlement, the church has stood secure for over seven and a half centuries. The verse engraved on the water is from Psalm 24. 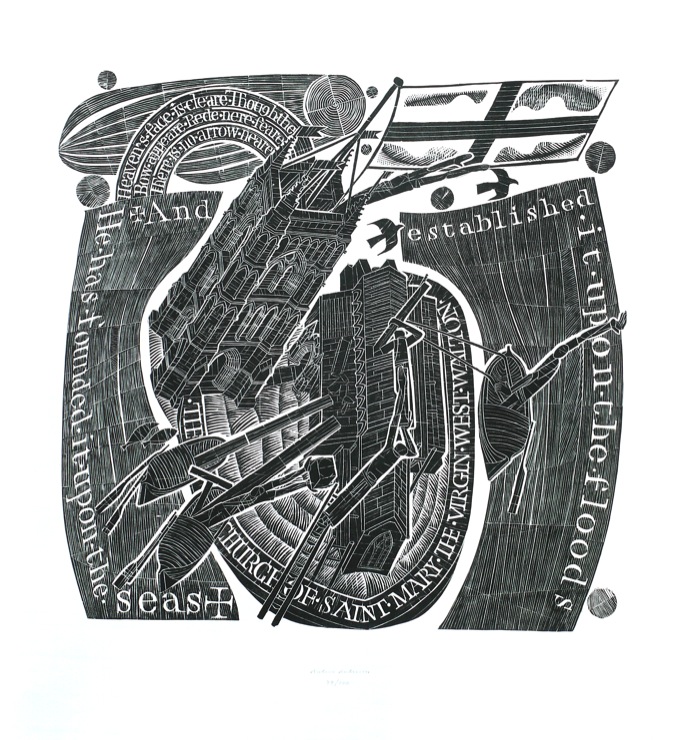