THE ROCK OF CASHEL

I came across the Rock of Cashel in Ireland unexpectedly, on a journey in 1960 to the early monastic sites on the Atlantic coast. It lies astride the Dublin to Cork road, overlooking the Golden Vale − the wide limestone plain of Tipperary − crowned by a cluster of largely roofless medieval buildings with high stone walls that blend seamlessly with the treeless rock on which they stand.

At the centre of the group is Cormac’s Chapel, the only roofed building on the site, a Romanesque church of Drumbane sandstone with twin flat-topped towers and a steeply pitched stone roof over a tunnel-vaulted croft, consecrated in 1134. Adjoining the chapel, on a more southerly alignment, is the 13th century choir, nave, porch, north and south transepts and tower of the cathedral, with a 91 foot high 10th century round tower in the north-east corner of the north transept. There is a fortified archbishop’s palace at the west end of the nave, and a 14th century two-storey lodge − the Hall of the Vicars Choral − against the south boundary wall.

The Rock − Sidh Dhruim, the Fairy Ridge − is a place where history and legend meet, and mix inseparably − the home of shadowy chieftains and kings, a former military centre of ecclesiastical power and influence. The names resound − Core, the 4th century king of Munster; Saint Patrick who visited in about 450; Murtagh O’Brian, the donor of the site to the Church in 1101; Cormac MacCartach, the king-bishop and builder of the chapel; Archbishop Richard O’Hedian who fortified his residence in the 15th century, and the corrupt 100 year-old twice married Elizabethan archbishop Miler MacGrath. Not everyone was respectful. Murrough O’Brian, the First Earl of Inchiquin, ransacked the site and set fire to the cathedral in 1647 and Archbishop Arthur Price removed the roofs in 1749, leaving the interior open to the sky.

I had meant to stay a month but the vision of the ruins at Cashel was so great that all I could think of was drawing the outline and returning home to put the image onto lino. “Lord!”, I said in a letter to a friend, “It’s the nearest thing to the Heavenly Jerusalem I’ve seen yet.” Something big was clearly called for − the drawing I brought back was 7ft 6ins by 3ft 8ins. Working in the

heat of the moment, the cutting of the nine lino sheets was completed in 14 days, on a trestle table lit by an oil lamp in the loft of the outbuildings of a country house on the edge of Norwich.

The size of the blocks was determined by the dimensions of the double-crown Albion press I had bought for five pounds from a printer in Norwich. Six copies were produced originally, one of which was mounted and hung in St Stephen’s church hall in Norwich and is now in a house in Aldeburgh, Suffolk. Another was pasted on the walls of a flat in Chicago. The verses around the edge and across the bottom are from the Book of Psalms which are still recited when a church is
consecrated today.

The age of the lino − nearly 60 years − has resulted in minor damage in some places. For most of their life the blocks were stored unprotected behind drawing boards and filing cabinets, in plan chests, cardboard boxes and cupboards and, for a time, in a shed. No attempt has been made to replace inconsequential losses, or to disguise scratches. These are the patina of age.

The linocut has been printed in two sizes on single sheets in limited editions by the Curwen Press, available to order. The first is full size − 6ft by 3ft 10ins (1.84m by 1.17m) plus border − price £950 excluding packing, carriage and insurance. 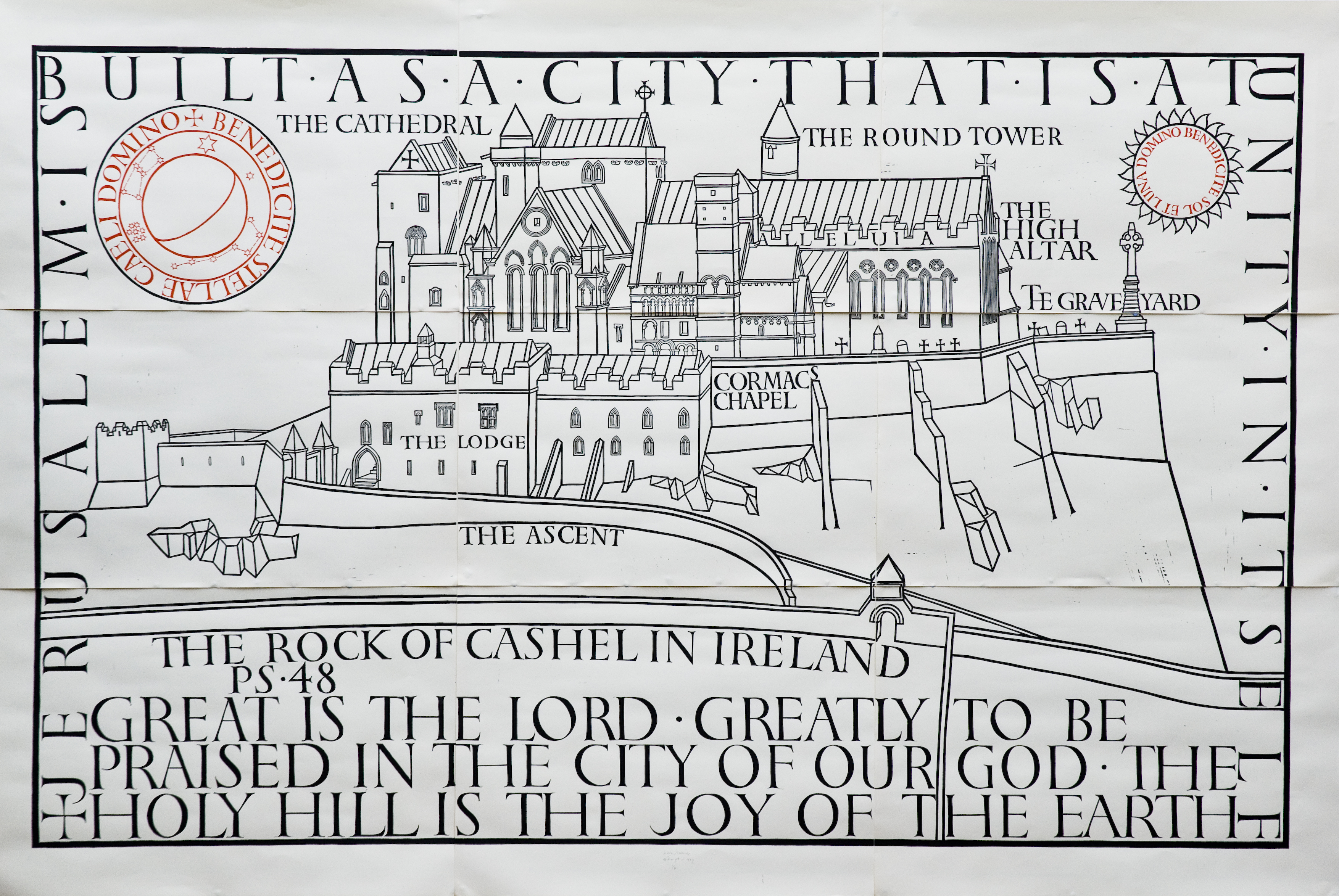