Worstead is in north-east Norfolk, between Cromer and Great Yarmouth. The church was begun in 1379 and was described by Sir Nikolaus Pevsner as “externally one of the dozen or so grandest Norfolk parish churches.” The tower is 109 feet high.

The linocut shows the church on the back of a sheep as the village gave its name to worsted cloth, a fabric made with a closely twisted yarn from combed long-staple wool for which it became famous in the Middle Ages. The sheep stands inside the churchyard wall and has a shield bearing the coat of arms of the de Worsted family rounds its neck and a staff with the flag of St George – the banner of the Church of England – in its mouth. The inscription around the edge is from the tenth chapter of St John’s Gospel.

Workmen in bib-fronted overalls climb through the rafters of the nave roof carrying tape measures, battens and boards to repair the timberwork, while overhead angels and birds fly. The shape of the angels is based on the Lightning jet fighters with their swept-back, square-ended wings that flew from the runway of RAF Coltishall a mile-and-a-half to the west of the church in the 1960s, so low that they seemed to scrape the top of the tower as they came in to land. At the top of the linocut are the sun and planets in their courses, running along celestial staves like the bar lines in a musical score. The round objects encircled with rings marked in quarters are planets, each identified by its astronomical symbol. In the top right corner are the waves of the North Sea, seven miles away, with the moon and stars rising overhead. The inscription is from St John’s Gospel.

The linocut dates from 1965 and was done to raise money for the repairs which began in 1960 and are still continuing. 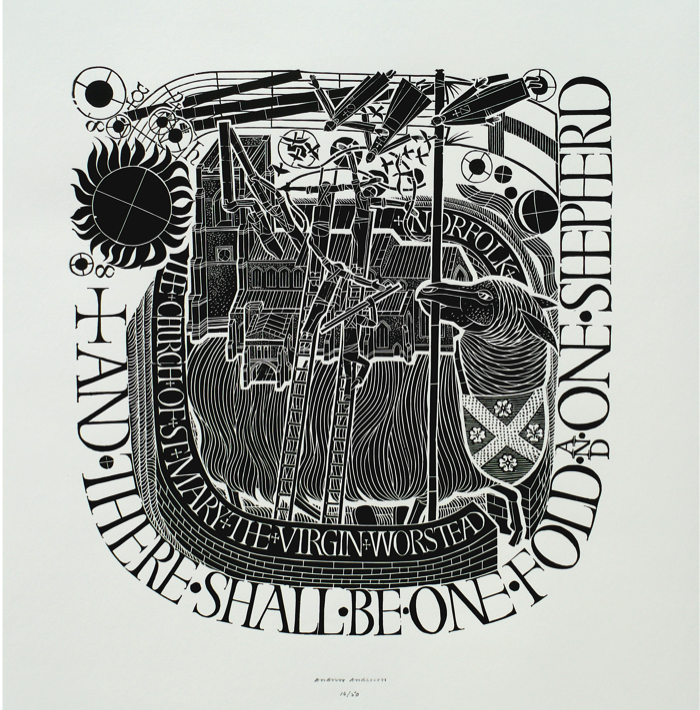